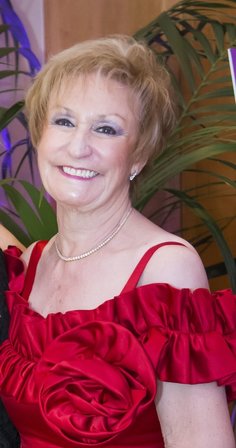 I was born in Birmingham, England 1948. My schooling over the years left me with 9 O Level's finishing with a two year Economic course.
​
Started my first job at Consett Iron, steel producing company in the north of England. The British Steel Corporation took them over and I then worked in Birmingham office.

In 1970, I joined M Taylor Steel - a Service Centre and Stockholder for special steels.  After two years I went to Sheffield to open up M Taylor Northern.  A wonderful challenge,  one in which I was so successful in obtaining orders, I was given a Directorship.

In 1975, I married my husband, Michael Taylor. I then moved back to Birmingham. That was the beginning of a wonderful life together. We worked hard and travelled the world selling our products and at the same time I did the purchasing for our special steels from all over the world.

We had clients from New Zealand - Far East - India - Africa - Europe -  Although we did not sell into America, we did purchase steels from producers there.

In the late 70's we had made lot of friends while on holiday in Miami and this was the base from which we became part of the Miami scene. We joined the Surf Club early 1980 - one of the most fun Clubs. In 1996, we became members of Indian Creek Golf Club, and here again made wonderful friends. For both Clubs, I worked on the Entertainment and House Committees.  Some 9 years later, I am still on the House Committee for Indian Creek.

I retired from running my company in Dubai in 2009, because after ten years, it was time to spend more time in Miami. I was able to give more of my time supporting the Humane Society. Diabetic and YPO functions.

I became involved with the Unicorn Children's Foundation and really cemented this relationship while in Monte Carlo with all the wonderful people working for the Foundation.

I am looking forward to the Functions this next Season and hope to have a success raising money for the Boys and Girls of the Unicorn Children's Foundation.

I was very pleased to accept a Board position in 2014.
© 2017 Unicorn Children's Foundation
REGISTRATION#: CH17062
A COPY OF THE OFFICIAL REGISTRATION AND FINANCIAL INFORMATION MAY BE OBTAINED FROM THE DIVISION OF CONSUMER SERVICES BY CALLING TOLL-FREE WITHIN THE STATE. REGISTRATION DOES NOT IMPLY ENDORSEMENT, APPROVAL, OR RECOMMENDATION BY THE STATE.
Terms of Service (“Terms”)
Last Updated:2/1/23
Please read these Terms of Service (“Terms”, “Terms of Service”) carefully before using the http://www.unicornchildrensfoundation.org website (the “Service”) operated by The Unicorn Children’s Foundation, Inc. (“us”, “we” or “our”). Your access to and use of the Service is conditioned on your acceptance and compliance with these Terms.  These Terms apply to all visitors, users and others who access or use the Service. By accessing or using the Service you agree to be bound by these Terms.  If you disagree with any part of the Terms than you may not access the Service.