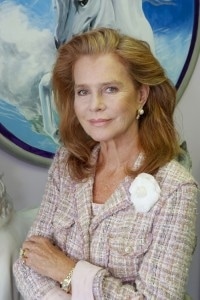 Mrs. Dalfen has been involved with The Unicorn Children's Foundation since its first Florida fund raising event in 1999.  Since that time she has served as gala chair, gala co-chair, chair of program book, and gala chair for the 2004 Mar-A-Lago Gala.  In addition to her work with the UCF, she was affiliated with The Canadian Jewish Congress (Montreal) and other international organizations.
Mrs. Dalfen was born in Stockholm, Sweden, daughter of a diplomat.  She consequently lived in many countries and speaks several languages.  She received a degree from the University of Lausanne in Switzerland.  After being married, she lived in Montreal, worked in the textile industry.  As her children were growing up she worked as a volunteer with several non-profits.
She now lives in Boca Raton, Carbondale, Colorado, and Montreal Canada and is married to a very supportive husband, Robert.  Although she likes to travel, golf, ski, run, and volunteer, her pride and joy are her children (two daughters and a son) and her twin granddaughters, Isabelle and Lucy.
© 2017 Unicorn Children's Foundation
REGISTRATION#: CH17062
A COPY OF THE OFFICIAL REGISTRATION AND FINANCIAL INFORMATION MAY BE OBTAINED FROM THE DIVISION OF CONSUMER SERVICES BY CALLING TOLL-FREE WITHIN THE STATE. REGISTRATION DOES NOT IMPLY ENDORSEMENT, APPROVAL, OR RECOMMENDATION BY THE STATE.
Terms of Service (“Terms”)
Last Updated:2/1/23
Please read these Terms of Service (“Terms”, “Terms of Service”) carefully before using the http://www.unicornchildrensfoundation.org website (the “Service”) operated by The Unicorn Children’s Foundation, Inc. (“us”, “we” or “our”). Your access to and use of the Service is conditioned on your acceptance and compliance with these Terms.  These Terms apply to all visitors, users and others who access or use the Service. By accessing or using the Service you agree to be bound by these Terms.  If you disagree with any part of the Terms than you may not access the Service.